Researchers investigate the combined effect of drought and fire on stream communities, highlighting the importance of headwaters
Harrison Tasoff 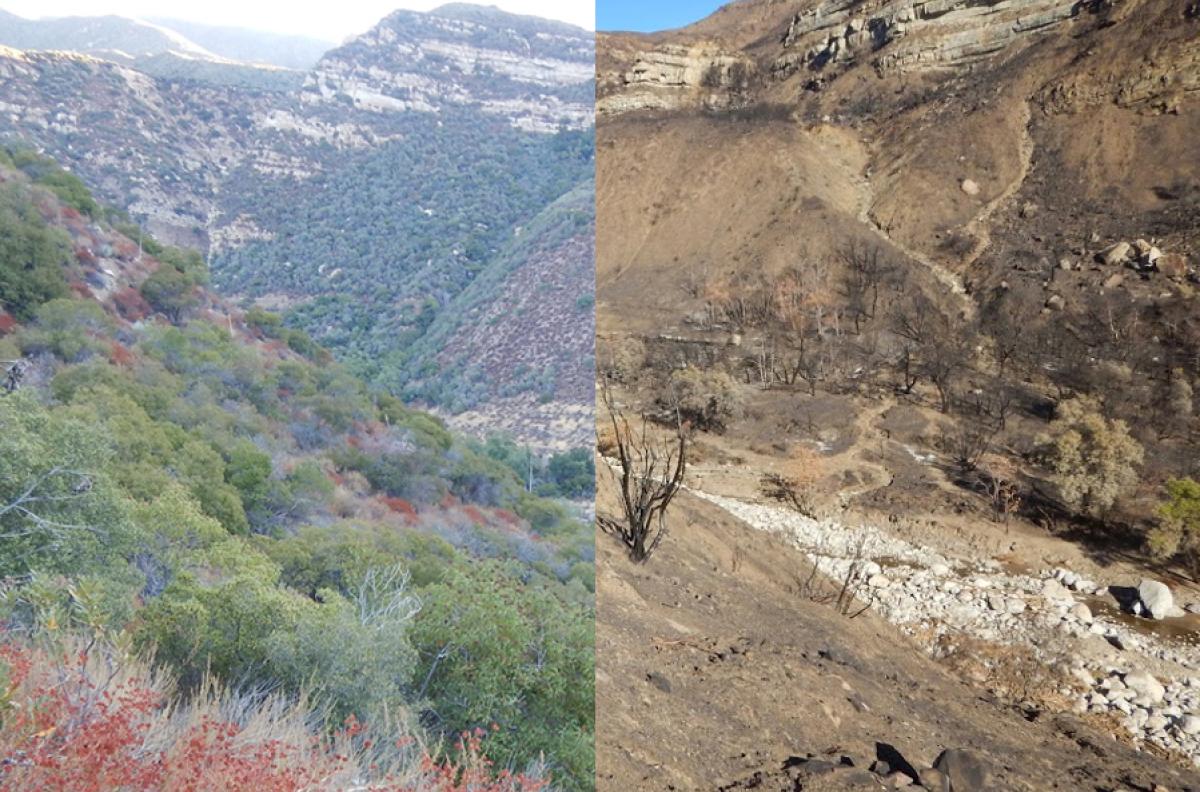 Matilija Creek before and after the Thomas Fire and subsequent debris flows. Fire and its aftermath can completely reshape streams and their communities. Photo Credit: Bryan Conant, Los Padres Forest Association

A team at UC Santa Barbara and the National Forest Service have studied wildfire impacts on streams over the past five years in parts of the Los Padres National Forest. The scientists’ new findings appear as the cover story in the December issue of Freshwater Science.

The results of this study also highlighted the significance of stream headwaters as refuges for sensitive aquatic species during fire and drought. After favorable conditions return, fish, amphibians and invertebrates can repopulate suitable downstream areas. This insight reinforced the importance of protecting these areas to ensure the resilience and biodiversity of watersheds as a whole.

Lead author  Scott Cooper, a research professor in the Department of Ecology, Evolution, and Marine Biology, explained that in the short term, fires and landslides can increase creek flows because there are fewer plants drawing water from the soils and channels. Increased flows during storms can scour streams and displace their flora and fauna, reducing their populations. Algae and certain invertebrates can quickly recolonize streams after flows recede, particularly if fire has opened up the riparian canopy. Streams often recover to pre-fire conditions within one to two years, Cooper added, because vegetation quickly re-establishes in Mediterranean climates with their year-round growing seasons.

After 10 years, the team found that most stream communities had recovered from fires. It’s still an open question whether drought hastens or delays an ecosystem’s reaction to fire. However, one thing consistently held true, though: Pools in stream headwaters were critical to the ecosystem’s recovery.

Wildfires and the ensuing rains or drought vary in extent, timing, intensity, duration and magnitude. This results in a complicated, multi-dimensional matrix of fire and subsequent weather conditions.

Cooper, who has studied these systems for four decades, summed up the results. “There are two things I’ve concluded from being an ecologist: “Everything’s interconnected and everything’s dynamic.”