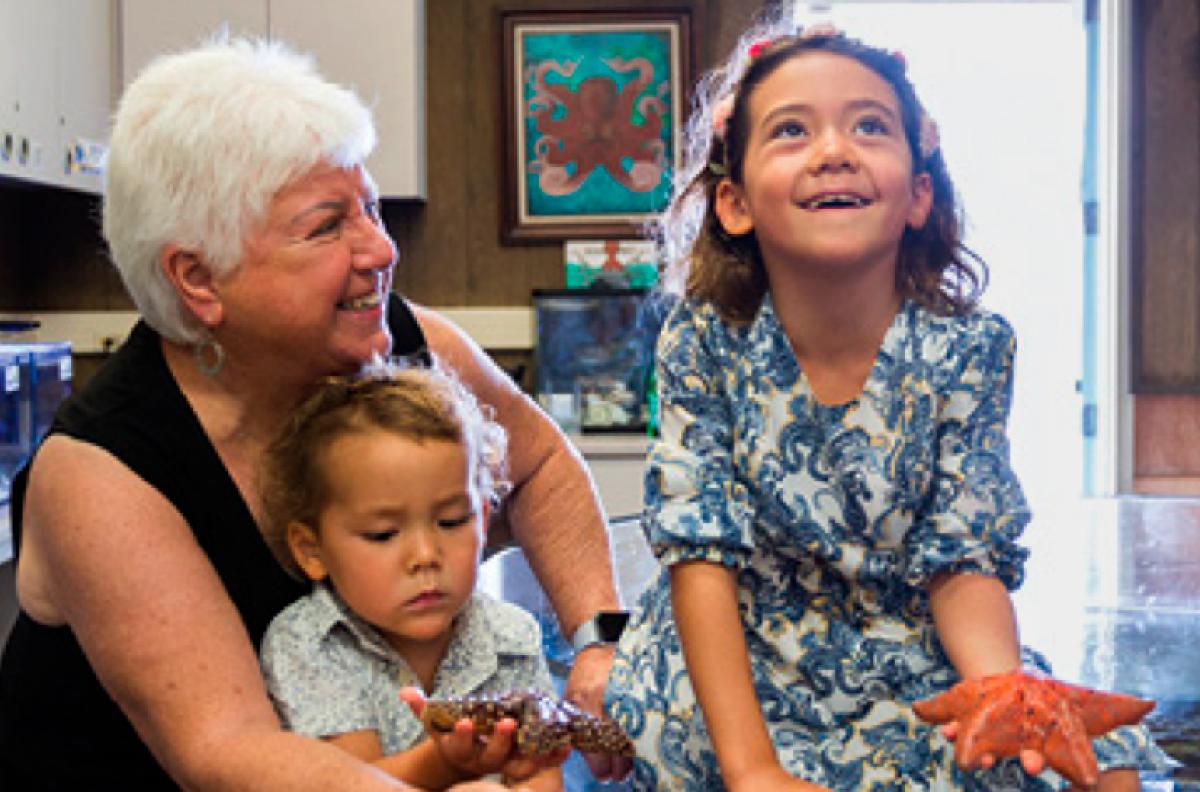 Betty Wells Elings with her grandkids at The REEF aquarium

As a beach-loving 12-year-old, Jeff Elings found a shark egg in the sand and brought it home. With help from his mom Betty, he put it into an aquarium and nurtured it with a daily supply of ocean water. Then it hatched.

Thinking quickly of nearby UC Santa Barbara and its teaching aquarium, the REEF, Jeff gave the newborn shark to the then-new touch-tank space. Such was the family’s first donation to what is formally known as the Research Experience and Education Facility.

Now, years later, that gift has inspired another.

“I don’t know what ever happened to the shark Jeff put in the REEF tanks back then, but in a way, that’s how this gift started,” said Wells. She was motivated to make her donation by two more recent events: learning firsthand of MSI’s research prowess and outreach efforts, and a talk by ocean explorer and alumnus Bob Ballard, who discovered the Titanic, about his work and commitment to education.

“I hope this gift will help provide a better experience for all the children that go to the REEF, different things for kids to feel and touch, and even more great teaching about the oceans,” Wells added. “The oceans are so important to us all, and they are going to be even more important in the future.”

Said UCSB Chancellor Henry T. Yang, “Betty’s tremendous gift to the REEF will support capital and programming enhancements that will transform this vital research and educational facility. Through MSI and the REEF, over 20,000 students annually learn about the diversity of marine life and gain an enhanced appreciation of our ocean environments. Our Marine Science Institute is the premiere research and educational facility for Santa Barbara coastal and Channel Islands research, and our faculty are among the leading scientists engaged in oceanic research globally. We are immensely grateful to Betty for a remarkable 50 years of friendship and philanthropic leadership on our campus.”

Wells has now made multiple leadership gifts to campus. She previously donated $1 million to help renovate the former Faculty Club (now The Club & Guest House, where both a pavilion and a terrace bear her name). With former husband Virgil Elings, Wells gave $12.5 million to support research at the California NanoSystems Institute (CNSI); the building that houses CNSI is named Elings Hall in their honor.

This new philanthropy to the REEF and MSI is personal for Wells, who said she made the donation on behalf of her children, her grandchildren and her family’s lifelong affinity for the ocean — as well as a belief in the power of education.

“All my kids love the ocean, I have three grandchildren that live here and three in Colorado, and they all love spending time at the beach, so I thought I’d do this in honor of them,” Wells said. “Many of the kids that come to the REEF have never been to the beach,” she added. “Just getting to go to the beach and have some interaction will help kids to understand, early on, the dangers of putting stuff in the ocean. If they see these things and are taught that they come from tidepools and if you dump things in ocean they’re not going to be there anymore — that’s so important.”

Fostering such connections to and respect for the ocean and its ecosystems is at the heart of MSI’s robust educational outreach. The institute’s multifaceted Oceans-to-Classrooms program integrates coastal marine science with regional and global perspectives for students in Santa Barbara and Ventura County.

A key piece of that — and a big draw for families and the general public — is the REEF, where state-of-the-art touch tanks and aquaria range from 2 to 2,000 gallons. The interactive facility also boasts a high-tech life support system for a special research tank, which highlights current and ongoing ocean projects at MSI and UCSB. Meanwhile, the Mobile REEF brings K-12 programming into area classrooms.

“Supporting local education has been the main driver behind the REEF and the Oceans-to-Classrooms Program,” said Scott Simon, REEF director and education outreach program manager for MSI. “Betty Wells has been a longtime member of this community and truly ‘gets’ the beauty and value of all the resources here. The Betty Wells Marine Science Outreach Initiative is going to allow us to do a lot of great new things, as well as enhance the work we’ve been doing to improve environmental science literacy in our community — especially for the next generation.”

Tapping into its own resources, and those of UCSB more broadly, MSI is uniquely positioned to link marine research and education. Its outreach programs do exactly that, providing an ocean view of the world to students from pre-K12 to post-secondary institutions, as well educators at every level and the broader community.

Thanks to Wells, there is more to come, according to Mark Brzezinski, director of MSI and a professor of biological oceanography.

“This incredibly generous gift will allow MSI to take the REEF activities to the next level, improving both infrastructure and programs for UCSB students and the general public,” Brzezinski said.

New exhibits and aquaria, as well as technological improvements to the REEF and its adjacent classroom space are all part of that “next level.” In addition, new outreach programs and educational resources will be developed to “articulate areas of commercial and recreational fishing, the significance of oil in our community and the effects on both tourism and locals,” noted Simon.

“In this community rich in maritime history and culture, from the Chumash to modern use and practices, the ocean is a vital social and economic resource,” Simon said. “I grew up in Santa Barbara, and nothing is more amazing than the resource we have right in our own front yard — the Santa Barbara Channel. While research and exploration play important roles in understanding the impacts of climate change on a global scale, it is equally important for people to understand the impacts at a local level. The work being done at MSI and the Bren School of Environmental Science & Management is helping to illuminate those ocean impacts. Through the REEF and Oceans-to-Classrooms we are connecting, communicating and educating people about the role the ocean plays in our community.

That is so important.” Betty Elings Wells is a successful real estate investor and property manager in Santa Barbara, Santa Ynez, Iowa and Arizona. She and Virgil Elings launched numerous successful entrepreneurial ventures, including Santa Barbara-based Digital Instruments (DI), which pioneered the development of atomic force and scanning probe microscopes that led to a scientific revolution at the nanoscale. DI was acquired by Veeco Instruments Inc. in 1999.

At UCSB, Wells served two terms as president of the Faculty Women’s Club (a campus support network now known as the Shoreliners) and four years as the group’s treasurer. She joined the UC Santa Barbara Foundation as a trustee in 2013.

“Betty Wells has such a long history with this university that when it comes to philanthropic needs she knows the campus intimately,” stated Beverly Colgate, Associate Vice Chancellor for Development at UCSB. “Each investment of private support provides transformative change. This gift to the REEF ensures programming far into the future for our local community as well as enhancing a critical research environment for our campus. We are so grateful to Betty.