Urchins emerge to forage on living kelp when they can’t catch kelp scraps, mowing down swaths of the underwater forest
Harrison Tasoff 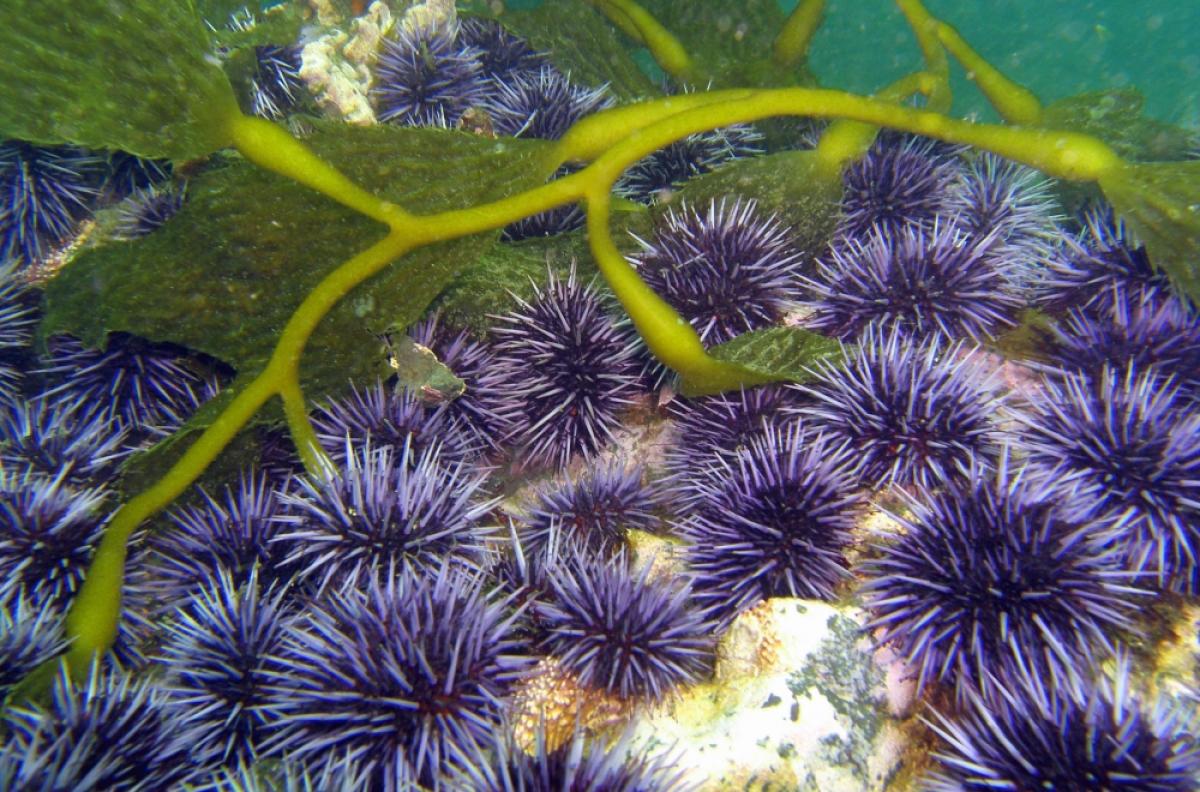 Purple sea urchins are munching their way through California’s kelp forests at a speed and scale that have stunned scientists, fishermen and divers alike. But the kelp forests have long been home to red and purple urchins, so it’s clear the three species can get along. Researchers at UC Santa Barbara sought to determine what factors disrupt this harmony.

“Why is it that in some places urchins cause the demise of a kelp forest, and in other places urchins and kelp can coexist?” asked Associate Professor Adrian Stier. “Our analysis shows what’s going on under the hood. It offers a lot more resolution in explaining when and where you might expect urchins to devour kelp.”

That analysis, led by doctoral students Mae Rennick and Bart DiFiore, appears in the journal Ecology. The authors combined laboratory experiments with 20 years of field data to uncover what prompts urchins to begin eating their way out of a home. The results suggest that the supply of kelp scraps, or detritus, may be the deciding factor.

Co-author Dan Reed, a research biologist at UCSB’s Marine Science Institute, formulated the hypothesis behind this study several decades ago. “Back in the 1980's, we noticed one of our sites at San Nicolas Island transitioned back and forth between kelp forests and sea urchin barrens without any change in urchin density,” he recalled. “This led us to believe that the availability of kelp detritus altered the foraging behavior of urchins from passive feeding, when detritus was abundant, to active grazing on living kelp, when detritus was scarce.”

Rennick and DiFiore set out to test this hypothesis. They collected purple and red urchins from the field and brought them back to their lab. After acclimating the urchins to the tanks, the researchers withheld food from them for about a week. Then they added kelp into the different tanks, weighing it before feeding and 48 hours after feeding for purple urchins, and 96 hours for red urchins, to determine how kelp consumption changes with urchin density.

The scientists expected to observe one of three types of density-related feeding behaviors. Consumption might decrease with density if urchins compete with each other. Alternatively, urchins could ramp up their consumption rates, forming a feeding front like locusts. Finally, density could have no affect at all on consumption rates.

Indeed, the experiment revealed that urchins seem to feed independently. “Our analysis showed that there are linear relationships between urchin biomass and consumption rate,” DiFiore said.

From their experiment the researchers learned how much the urchins need to eat, and from the LTER data they learned how much detritus the urchins might be getting, ascertained urchin density and determined the amount of living kelp at a given site and time. Combining the data and lab results enabled them to hindcast how much kelp both purple and red sea urchins may have consumed at each location in the SBC LTER in a given year.

A healthy kelp forest is incredibly productive, and there’s a lot of biomass turnover as the giant algae sheds fronds and blades. “It’s dropping its blades constantly as those individual leaves die,” DiFiore explained. “And so, you have this huge biomass available for urchins to eat.”

In an ideal world, an urchin would squirrel itself away and catch kelp scraps drifting by with its tube feet. Then it would dine on its meal from the safety of its little hole. But if there’s no longer enough detritus to support this secure lifestyle, the urchin is more likely to venture out and forage on living kelp. And the less kelp you have, the less detritus it supplies, and the more urchins come out. This creates a feedback loop that can push the ecosystem over a tipping point, causing a sudden shift in the community makeup. Finally, researchers have a grasp of one of the mechanisms driving urchins to mow down kelp forests.

The authors believe their findings can inform how to approach kelp forest management and indicate where efforts are likely to be effective. “The study suggests that the places most likely to benefit from restoration are those with a hardy supply of detrital kelp coming from elsewhere,” Stier said.