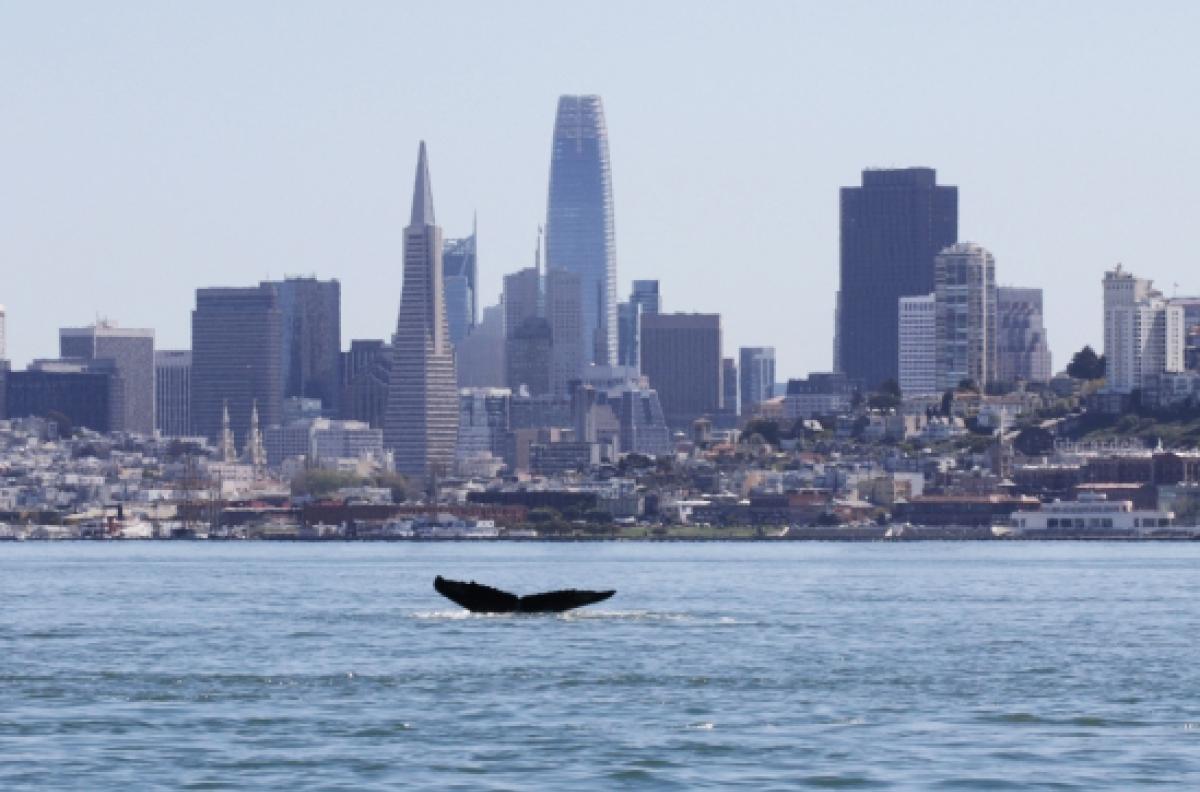 Three weeks ago, the hearts of ocean scientists and whale lovers were broken when the body of California’s most popular humpback whale, known as “Fran,” washed ashore at Half Moon Bay, the victim of a ship strike that dislocated her skull from her spine and fractured her vertebrae.

“For those of us in the ocean science community, this was a real tragedy,” said Douglas McCauley, a marine science professor and director of the Benioff Ocean Science Laboratory at UC Santa Barbara. “It was like waking up to find out Smokey the Bear had been roadkilled.” Beloved by those who followed her hundreds of sightings over the years, Fran was a new mother who had just successfully brought her calf to the local feeding grounds. The fate of her calf is currently unknown.

Fran is only the latest casualty in a disturbing and years-long trend of whale-ship strikes occurring at or near the San Francisco Bay, which hosts the third busiest container port in California. The Port of Oakland loads and discharges virtually all of the containerized goods moving through northern California. At the same time, its cold waters provide rich feeding grounds for the endangered creatures. As a result, it’s also one of California’s top whale-ship strike hotspots.

“2022 has already been a deadly year for whales in the San Francisco Bay area,” said Kathi George, field operations and response director for The Marine Mammal Center in Sausalito, just north of the Golden Gate Bridge. Since early 2021, the center has responded to 30 reported dead whales, with eight of them — including Fran — showing evidence of ship strike.

Fortunately, things are about to change. The Benioff Ocean Science Laboratory (formerly Benioff Ocean Initiative), along with a consortium of research and conservation institutions, have banded together to launch Whale Safe in the San Francisco Bay, a whale monitoring project that puts eyes and ears on the majestic creatures as they cruise up and down the northern California coast. Merging technology with conservation science, the aim is to alert enormous vessels — some the size of skyscrapers —to the presence of whales. Ships in the area could then slow down to avoid collisions, a leading cause of death for the endangered whales.

Successfully implemented, this intervention also provides other important benefits. Slower ships produce fewer CO2 emissions, and living whales store the carbon equivalent of thousands of trees. Slower ships are also good for our health, especially in lower-income areas around ports. Ships operating at reduced speeds produce less harmful air pollution that can cause and exacerbate diseases like asthma, especially in children and the elderly who are often at greater risk.

“Whale Safe is on a mission to help save the incredible mammals who have ruled the oceans for tens of millions of years,” said Marc Benioff, chair and co-CEO of Salesforce. “Whale-ship collisions continue to be a leading cause of death for endangered whales, but with these new kinds of monitoring technologies and alert systems, fatalities have begun to decline. This is a triple win for the planet — we save the whales, fight climate change and promote community health by cutting air pollution. We need more solutions like this coming out of alliances between science and business.”

Today also marks the announcement of a $60 million gift from the Benioffs to UC Santa Barbara to expand the work of the Benioff Ocean Science Laboratory; it is one of the largest known philanthropic gifts ever to ocean science.

Whale Safe is the first whale detection system of its kind in the Pacific Ocean. It got its start two years ago in the Santa Barbara Channel, an area where the whales’ ancient migration paths overlap with some of the world’s busiest shipping lanes. Cargo ships coming from and going to the Port of Los Angeles squeeze into the Channel, bounded by the California coast on one side, and the Channel Islands on the other.

Gargantuan ships striking whales isn’t a new phenomenon. The National Oceanic and Atmospheric Administration (NOAA) and collaborators since 2007 have been working with success to get these vessels to voluntarily slow to a 10-knot (11.5 mph) speed in the Channel. When the ships do slow down, the results can be dramatic — up to 90% reductions in whale-ship fatalities.

Still, in 2018–2019, ships and whales were colliding at an alarming rate. In response, McCauley, with the Benioff Oceans team, launched an ambitious program aimed at predicting the presence of whales and detecting them in near real-time as they move through the Channel. In a collaboration with colleagues at Woods Hole Oceanographic Institute (WHOI), Norwegian University of Science and Technology (NTNU), the University of Washington (UW), UC Santa Cruz, Conserve.IO and NOAA, the scientists combined an AI-powered acoustic monitoring system to “listen” for whale songs; near real-time predictions of whale feeding grounds based on oceanographic data; and a mobile app called Whale Alert that collects sightings reported by trained naturalists and citizen scientists. The information is integrated into a publicly-accessible online map that shows just how full of whale and ship traffic the Channel is. With this information, tankers, cargo ships and other huge oceangoing vessels are encouraged to slow down, and in return are “graded” for their cooperation.

“Every year since the original launch of Whale Safe we have seen an increase in ship cooperation rates — which is good news,” McCauley said. “It’s a collaborative effort building off the success that NOAA and Channel Islands National Marine Sanctuary have been working on for years at slowing vessels down in the Channel.”